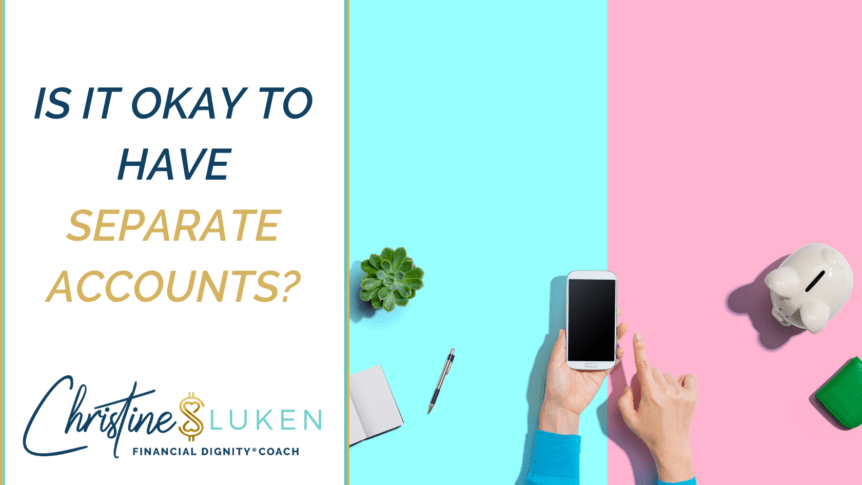 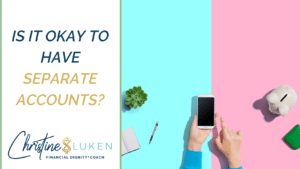 Married couples having separate bank accounts might conjure up images of mistrust or deceit between husbands and wives.  However, I think there are certain situations where separate accounts can be a good idea.  First, let me put forth a few disclaimers.  I think deliberately hiding money or debt from your spouse or partner is a horrible idea.  I also firmly believe that spouses should have access to ALL accounts, even if they don’t normally exercise that access.  The reason a couple might want to separate some of their money is to reduce – not increase – disagreements over spending.

Here are some scenarios when having separate accounts is okay:

If you’re not married yet, having separate accounts is definitely okay.

In fact, I don’t think you should add your fiancé to your checking and savings accounts until you are legally married.  Engagements are occasionally canceled and it can be an enormous pain to have your ex-girlfriend/boyfriend/fiancé removed from your accounts!

I think it’s a great idea to have separate accounts for your “Fun Money.”

When you’re part of a blended family, having separate accounts can be okay.

There can be a good deal of fighting and disagreements between spouses when stepchildren are in the picture.  Not only do parenting styles differ, but also spending choices.  Sometimes it helps for husbands and wives to agree on a total amount to spend on “her kids” and “his kids”, and each parent decides how to allocate that total between their own kids and the various categories.  If you’ve already agreed to the total and are sticking to it, then there’s no reason to bicker over the details!  (As a side note, if you are getting married for the second time and there are stepchildren involved, please consult an attorney for the proper estate planning.)

When one spouse KNOWS they have a tendency to overspend and AGREES he/ she shouldn’t have free rein over all of the accounts.

Some spenders feel like they can’t trust themselves to behave with the debit card or checking account, and would prefer to have a certain amount of cash every week (or the pre-paid Visa card).  If you’re a chronic over-drafter, this may be a good solution.  Now, listen up control freaks!  This only works when your overspending spouse admits and agrees to this, otherwise, you imposing this upon them will only end you up in divorce court. (Doing this against their will is financial abuse, so just don’t!)

Want help combining your finances and improving your communication around money? Let’s see if my Financial Dignity® Coaching for Couples is the right solution for you.