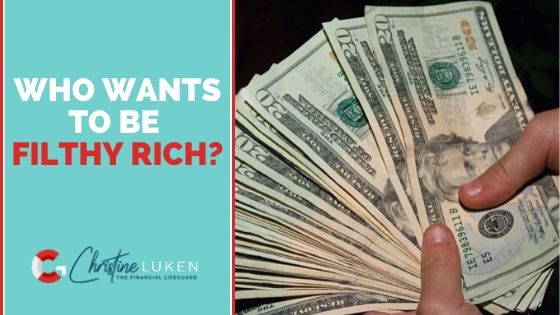 Who wants to be filthy rich? (NOT me!) Don’t get me wrong, I definitely want to be rich. I could just do without the filthy part. The word filthy conjures up images of pigs rolling in mud. In fact, Dictionary.com defines filthy this way: “Foul, disgusting, completely dirty; vile, vulgar, obscene.” Nope, I definitely don’t want my riches to be filthy!

The rich people I know personally are not filthy by any means. They live in beautiful houses, drive well-maintained cars, and are genuinely nice people with good morals.

Hmm… I wonder if someone invented the term “filthy rich” to make themselves feel better about being poor? So, I did a little digging to discover the origins of the phrase.

Where Did the Term Filthy Rich Come From?

Turns out that it has its roots in the phrase “filthy lucre,” which was first used in the 1500’s to refer to money obtained through dishonorable means. The term “filthy rich” first appeared in America in the 1920’s. It was used in reference to the very wealthy people who managed to largely escape the ill effects of the Great Depression. These rich folks purchased houses, land, and other assets on the cheap from people desperate for cash.

Well, I don’t know about you, but I earn my money by helping lots of people, which is pretty honorable, right?

Why Don’t We Devise Better Replacements for Filthy Rich?

The words we use are extraordinarily important. However, most of us don’t pay attention to the words we use around money. It’s something I work on with each and every one of my clients. Why? Because we want to make sure their “money blueprint” on the inside matches what we want to build with their finances on the outside.

Tell me, which brand of rich do YOU want to be? Abundantly rich, amazingly rich, fabulously rich, honorably rich, awesomely rich… or something else?

Spending out of control? Master it with my FREE mini-course!